Following straight on from Giant Size Defenders 5, this was the second part of the 5 part Guardian’s story. It contains the same characters as last issue, so won’t be too fussy about a roll call. It was written by Steve Gerber, on his own this time, with Sal Buscema and Vince Colletta bringing the art.

The story opens with Valkyrie sitting on a cliff, being talked to by Jack Norris. This was a returning subplot. For those unfamiliar with the Defenders of this time, Valkyrie was a personality, mystically created by the Norse Enchantress and was placed into the body of Miss Barbara Denton, completely wiping out her personality and  memories. The problem was that Barbara was now Mrs Barbara Norris a newly wed and her husband from her previous life had tracked her down. Val liked Norris, but he couldn’t accept that Val wasn’t his wife. He presses this point again by kissing her to reawaken her feelings for him.

Considering how date rapey that sounds, he’s lucky that she doesn’t cut something off when he tries that. Just then an earthquake strikes, one of a number of strange meteorological events occurring due to the temporal disturbance around the Guardians of the Galaxy.

The Guardians and the Defenders discuss this, as the USS Captain America is discovered by local news and the local military. As this happens Martinex, who had remained on the ship to make repairs, walks out along with Vance Astrovik, the younger version of his team-mate Vance Astro. Vance sees this on TV and asks Doctor Strange to do something. Strange focuses and sends an energy bolt to the ship and causes it to vanish and appear nearby. 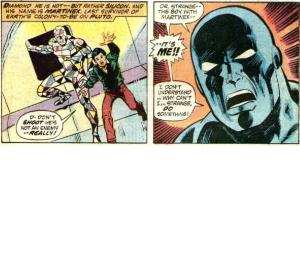 With all reunited, the majority of the rest of the issue is taken up with Vance telling Young Vance the history of things to come, from ozone depletion, cyborgs, riots and the odd invasion it does paint a bleak picture of the time again, or since I’m reading this in 2014, the last 30 or so years. 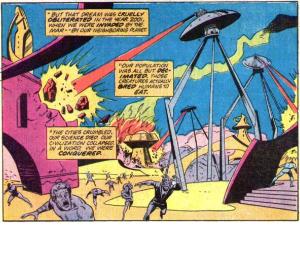 Vance finishes explaining this to his younger self before Doctor Strange WIPES THE WHOLE THING FROM THE CHILD’S MEMORY! Then  he sends the boy home to… well what does the Doc care.

Ok rant over, now on with the plot.. through the Deus Ex Machina of Doctor Strange’s magic, the ship arrives in orbit over a thousand years after they left. Doctor Strange then tells them to look at the conquered Earth, it won’t be like that for long.

Notes:
Not a great issue on it’s own. Half of it is a very exposition heavy info dump and the rest of very much treading water, with many of the characters and the plot waiting for something to do.
As as single issue it’s sub par, but it works as part 2 of a 5 part story it works rather well as it leaves the stage set for the Defenders and the Guardians of the Galaxy to face the Badoon.