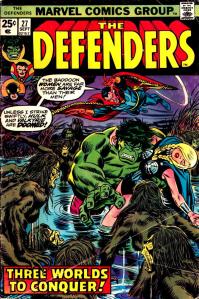 Following on from issue 26 this was part 3 of the Guardians story, again same cast and credits, so lets get on with the show.

The Badoon observe the recently appeared Captain America and the Badoon in charge orders the ship to be taken intact. Inside the ship Martinex is preparing to send Valkyrie, Vance Astro, Yondu and the Hulk down to New York via the ship’s matter transporter. Just as he does so, the Badoon send a signal to the ship and the matter beam is split sending the team to different locations through subspace. From inside the ship, the signals look lost and in a panic Jack Norris, who had sneaked aboard before the ship let the 20th Century, blames Martinex for killing his wife. This despite the fact that Valkyrie doesn’t consider herself Jack’s wife, nor does she ever remember being so, Doctor Strange holds him in place as he and Martinex try to work out what to do.

The Beams were split into two paths, one led Vance and Val to a swamp-like world with two moons. 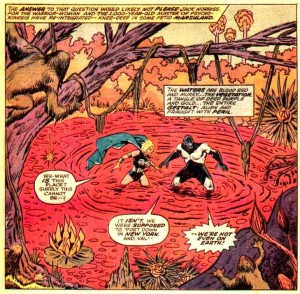 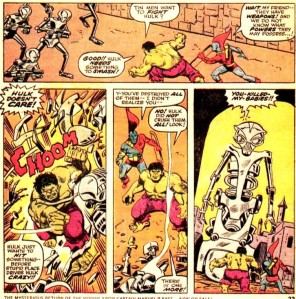 Hulk and Yondu arrive on a much more earth-like world with humans on it acting drunk/drugged. Yondu and Hulk find a woman being attacked by several men with sticks, when they step in to save her, their reward is a slap. Hulks notes how everyone they see is acting stupid. They are quickly set upon by silver robots which are promptly destroyed. Another, larger robot appears and screams that Hulk & Yondu have killed her babies and zaps the two of them with some sort of stasis beam. They are led to a man dressed like a roman emperor who surmises that his allies, the Badoon have sent them to him and demands they be taken to the studio for interfering in the death festival.

On the ship, Martinex hooks Doctor Strange up to the ship’s computers to enable the Doctor to search mystically for the missing teammates. This releases a lot  of power, which is noticed by the Badoon. 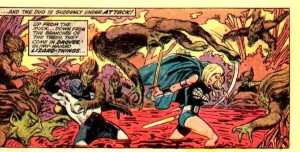 On the swamp world, Valkyrie & Vance are set upon by some reptilian looking creatures with matted hair and their numbers start to wear the duo down. Valkyrie puts up a valiant effort, but notices how weak and nauseous she is, not how she is when fighting males. Just as she collapses, Vance clears away the reptiles using his psychokinetic power as he tries to pull her to safety a glowing figure beckons them. He uses a healing light to restore Valkyrie to full strength and then informs them, that they both owe him a debt. 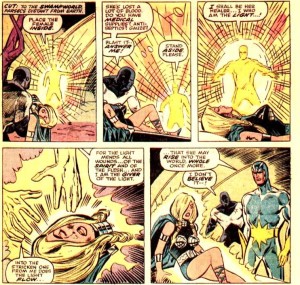 On the ship, as Doctor Strange continues his search, the Badoon have boarded the Captain America.

Notes: Based on the synopsis, this would seem like a dense issue, but it is in fact quite well paced and action packed. A lot happens in the 22 pages and it’s always cool to see Hulk smashing stuff, Usually part three can be a bit of a filler issue, but this isn’t. More pieces of the puzzle are laid out and it’s about to get interesting.