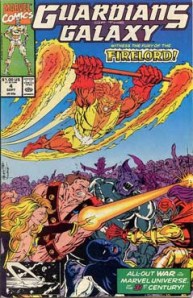 …And Then Came Firelord was written and drawn by the usual suspects of Jim Valentino and Steve Montano and opens seconds after the end of issue 3 and shows Starhawk firing at the Stark ship in orbit of Courg.  Firelord appears and in a rage also fires at the Stark ship with Starhawk stopping him and letting him know about the battle on the planet’s surface.

On the planet below, the Guardians are battling a contingent of Stark soldiers and are winning. They teleported down and all made it safely, except for the Stark general captured by Charlie-27.  The Stark are routed, all except for Taserface ( thankfully this is the last issue I have to read that name in, I have to stop myself chuckling to type it) how goes on the offensive against the team. 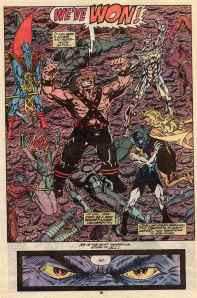 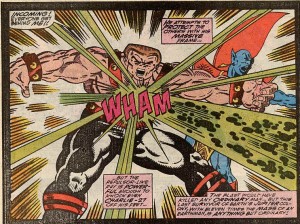 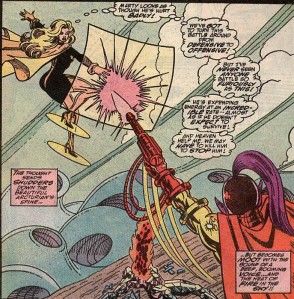 Doing well against the Guardians, just then Firelord arrives and after warning Taserface (giggle) to surrender, he burns him alive. Let me repeat this part of the show. He Burns Him Alive! 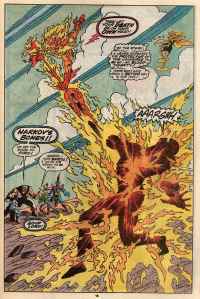 But lets not linger. The scene shifts to another world and we return to Force. This time we get one of those names and powers pages that they used in the 90’s to introduce characters in an organic story related way.

The team finds reference to the shield being on a world beyond Pleiades waiting for anyone worthy of possessing it.

The Guardians on the surface awkwardly not mentioning the fact that there is a still smoking Stark lying ten feet away. Starhawk arrives and tells them that he has secured the Stark ship and that they should disarm the Stark and then leave. Which they do, little realising Firelord’s burnt enemy is still alive and seeks revenge.

Now in command of the Stark ship, the team offer Firelord a place on the team, he declines, but accepts a star so he can keep in touch. Then because we’re at the end of the story, Firelord tells them about the same place Force know about and the team head off to find the shield after naming the new ship the Captain America II.

The Stark general is weirdly written out. It’s as if Valetino had written most of the story and only then realised she was missing and so added a couple of word balloons to cover.

The Guardians kick some arse and clear the battlefield, while not an important story point, I still enjoyed seeing it.

Yondu once again obsesses over the blue alien who killed Atur’s brother, but we have now learned that Photon (she of the safety pin pants) is a centaurian as well. Yondu is not the last survivor of Centauri IV as originally thought.

Nikki falls instantly in lust with Firelord and that just tears up Charlie-27.

“No.” At that point, he’s burned alive and this is the less impetuous Firelord?

Overall this is a good if not brilliantly paced story. My only real gripe is that Firelord appears only to burn Taserface (giggle) and point the Guardians towards Pleiades. But the art is great, the characters have each found their voice and the stage is set for a showdown with Force.

One thought on “Guardians of the Galaxy (Vol 1) 4”