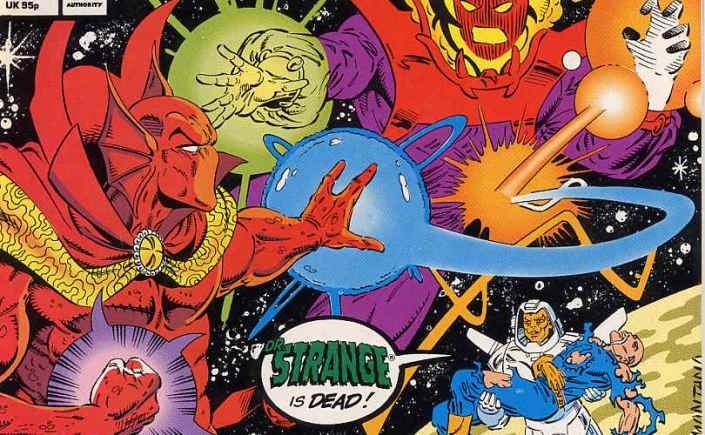 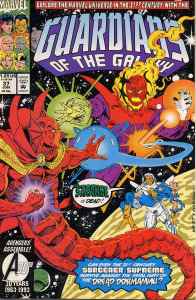 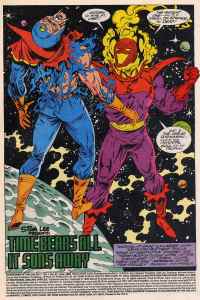 Time bears all of it’s sons away was written by Michael Gallagher, drawn by Kevin West and inked by Steve Montano and opened with the Dread Dormmamu holding the dead form of the Ancient One, Dr Stephen Strange in space, claiming his soul. 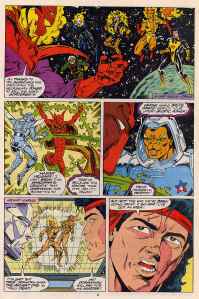 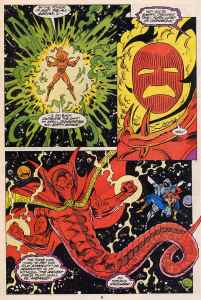 On the Icarus, Major Victory teleports Dormammu aboard, moving him from place to plae, allowing both Charlie-27 and Yellowjacket a chance to perform hit and run attacks, wounding and distracting their enemy. Dormmamu tries to vaporise the ship, being teleported away before that happens and leaving no damage done to the Icarus. Freed by Talon, Krugaar prepares to battle Dormammu. 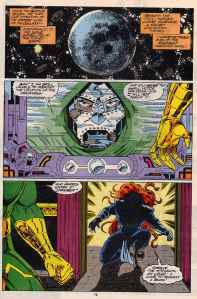 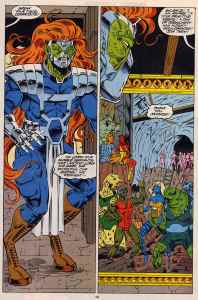 Back on Earth, Dr Doom is still looking for the Inhumans, but on the moon, a man in green and yellow scorns this attempt before being interrupted by an inhuman called Composite. Composite asks for a brief rest for the Inhuman slaves and is rewarded with a day of debauchery for all. 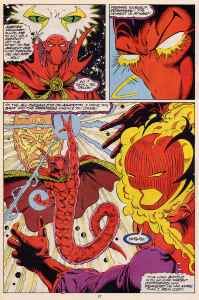 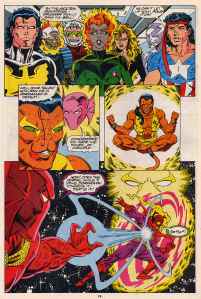 On the Icarus, the rest of the Guardians of the Galaxy and the Galactic Guardians are recalled and Krugarr and Talon use mystical means to subdue and banish Dormammu back to the dark dimension, where the mindless ones await him. 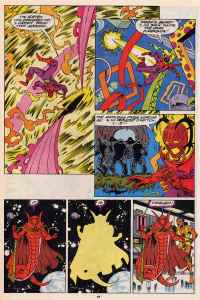 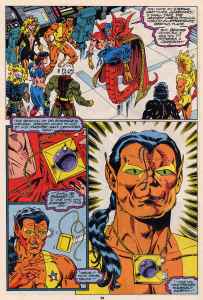 Krugarr returns to the ship and rewards Talon with the Ancient One’s amulet, to show he has proven himself worthy. He leaves, taking the Galactic Guardians with him, but not before Martinex donates the Icarus to Vance and the Guardians of the Galaxy and and Hollywood asks them to check in on the Commandeers back on Earth. 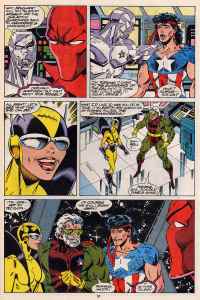 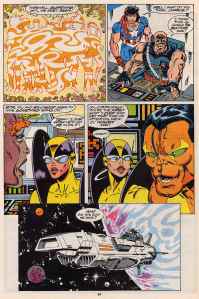 After the rest depart, Yellowjacket is surprised to learn that Hollywood was in fact Wonder Man.

In the final scene, Rancor convinces Doom that they can find the Inhumans on the Moon and Doom follows, too late realising that this is a trap and finds himself stabbed through the chest with the broken claw of Wolverine. 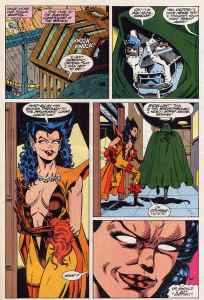 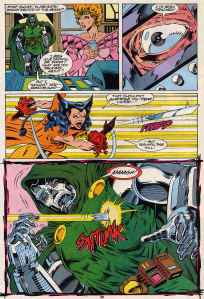 Rancor then demands that Mindscan show the workers in the Saltex compound whats happening, showing her in control and about to feast on the heart of Doctor Doom. 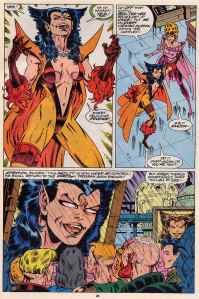 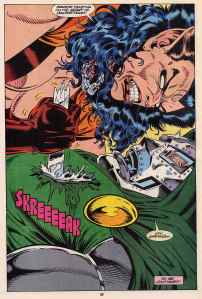 Notes: A bit more like it, the Dormammu battle is finished off after 4 months of waiting, but finished off in style. Yellowjacket gets to join the team in battle and I adore the scene with Charlie-27 pounding Dormammu left and right. After months of being in a sick bed, watching Charlie kick ass, is a welcome addition to this issue.

After hinting at it for a while, Talon is shown to be a gifted mystic, who lacked the confidence in his own worthiness. Holding his own against Dormammu and being gifted Strange’s amulet marks a change in the life of this Inhuman and gives him something to do beyond the Hawkeye-esque give grief to the boss quips he’s done so far.

Composite, the Inhuman seems to be made up of several of the current 616 Inhuman Royal family, having Triton’s skin, Medusa’s hair, Gorgon’s legs and the tuning fork of Black Bolt, he also has a muzzle, suggesting more than just the tuning fork. His master also gets a bit more a look in, giving hints as to who he may be.

The team restored and in their own ship, is a welcome sight and allows the series to get back to the hanging subplots which have now started to dovetail towards a main plot.

Doom being stabbed by Rancor seems only to be a surprise to Doom and these last four pages only serve to whet my appetite for the next couple of issues, things are coming to a head and that can only be a good thing, for a reader anyway.

Next Time: From Beyond.