Bang! Zoom! To the Moon! was written by Michael Gallagher with Kevin West and Steve Montano on art and opens with Charlie-27 being checked out medically after all his recent injuries. Thanks to the Trans-Molecular Reconstitutor , his health is back to what it should be and his strength has increased by 34%. Nikki also shows off her head’s ability to project flame upwards which she used on Charlie-27 back during the Badoon story. 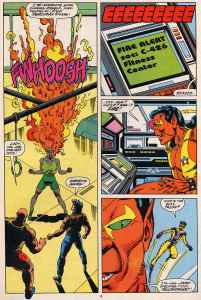 On the bridge, Talon is looking through the data taken from Dr Doom’s base on Earth. He finds reference to the Inhumans and their lunar city of Atilan. This brings up a lot of feeling from Talon and he gathers the Guardians together. After Vance Astro, Nikki and Charlie-27 change into their work clothes and more time to wait for Aleta/Starhawk to show up after some mysterious errand, Talon gives what is essentially his origin. In the early part of the 21st Century, the Inhumans of Atilan were betrayed and then sold into slavery and experimentation. Atilan was rebuilt by humans (as seen in Annual 1) and the Inhumans themselves worked in the mines. Talon was born into that. The unseen ruler of the Inhumans worked them hard, but to avoid rebellion offered them days of debauchery where they got drunk and got amorous. This meant that they didn’t get riled up enough to fight back and also the population continued to grow. 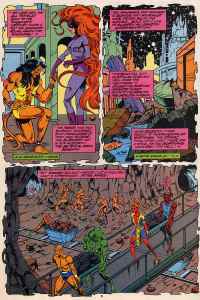 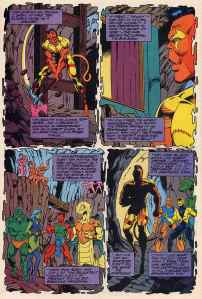 Talon wanted more and was isolated by this curiousity and sobriety. He was contacted in his cell by Krugarr who offered him a new life. While his apprenticeship was difficult, he embraced his new freedom and live in Manhatten till meeting the Guardians in issue 18. After hearing that this was still going on, the Guardians unanimously decide to go to the moon and liberate the Inhumans.

Meanwhile on the Moon we are again shown Loki ruling the Inhumans and sending Composite to kill the Intruders when the Guardians teleport down to the mines under the moon’s surface. Composite, the biologically engineered Inhuman with the skin of Triton, the hair of Medusa, the brain of Karnak, the legs of Gorgon and the voice of Blackbolt finds the Guardians and attacks them as Starhawk meets with Loki. 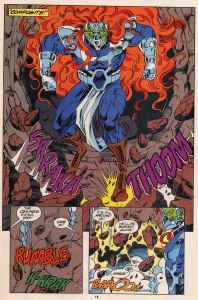 The Guardians are soon buried in the ground by Composites feet and are only not crushed by the power of Vance Astro. Charlie-27 at Talons suggestion punches through the wall until he breaks through and the Guardians escape. Charlie vows to show Composite what it means to take on the Guardians of the Galaxy. 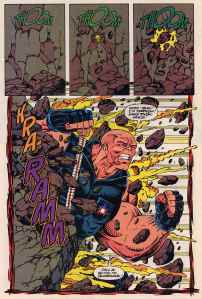 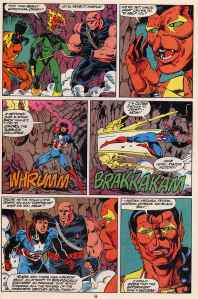 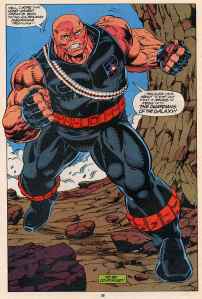 Notes: Bang, zoom, to the moon was a reference to the Honeymooners, the US sit com that was the direct inspiration for the Flintstones.

The subplot of the Inhumans has run on for quite a while now, making me wonder if not for Doom looking into them, would Talon  have asked for the Guardians to do something about it?

It was good to see Charlie back to full strength and his being a bit flirty with Nikki again.

Yellowjacket really hasn’t got much to do this issue at all in fact after page 10 of the story she’s seen in one panel and does absolutely nothing, might’ve been better to leave her on the Icarus.

Composite has all the powers of the original Inhumans, but Maximus, Crystal and Lockjaw aren’t mentioned, even though Maximus and Crystal were members of the Royal family.

While an interesting direction, this cold and dispassionate Starhawk version of Aleta is getting a bit tiring now. Her refusal of orders just makes her a Starhawk with boobs, nothing more than that and only serves to be another cross for Vance to bear.

Both Nikki and Charlie-27 are at their best here, both getting moments to shine and Vance shows off his enhanced powers, still not mentioning to the team where they and the black undershirt came from.

It’s an interesting cliffhanger, Charlie-27 standing there with a look that says Charlie’s had enough of your s**t. You want to see what happens next, you don’t want to be the next guy to cross him. This was a good issue and the last third of the series is off to a good start.