He that Dies Pays All Debts was written by Michael Gallagher, inked by Steve Montano and pencilled by Kevin West and opens with both Starhawks ready to battle in the skies over Centauri IV. (For the sake of clarity I’ll refer to them as Aleta and Stakar rather than Starhawk.) 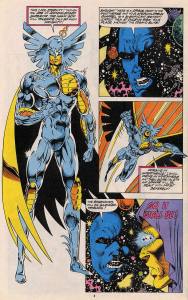 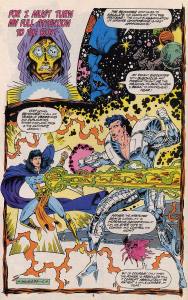 They battle fiercly while the Guardians look on and far off in space, others are looking. Eternity (the universe itself) and the Living Tribunal, a sort of supreme judge of the multiverse. They are both berating the Arcturian Hawkgod for the shameful actions of both of his avatars, the Starhawks. The Hawkgod decides to intervene, while the other two look in on the Protege who is chasing off the Beyonder, before Mephisto introduces himself and attempts to bond with the child.

Back on Centauri IV, the Hawkgod appears before Stakar and Aleta and ends their fight, pointing out their need to atone for their actions. As the Guardians witness this, some Badoon/Centaurian half breeds attack and Yondu for the first time in 20 issues is back with the Guardians of the  Galaxy. 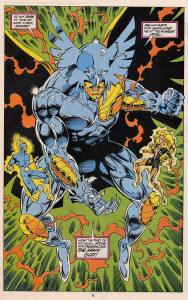 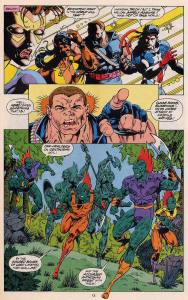 In an ongoing sub-plot, Hollywood beats up a giant alien informant in his search for Dr Doom, reminding the creature that old he may be, he is not to be trifled with. Also Eternity and the Living Tribunal have decided that the Protege is too powerful and has to be dealt with once ‘He’ arrives.

Back with the Starhawks, Stakar recaps his origin to show how he is alive and well now, using the power of Starhawk. The Hawkgod notes that Stakar has some of his history wrong, but he’s not going to point that out just yet. Aleta is still furious with Stakar and the two blast at one another. The Hawkgod is even more angry and uses their power to pull them together. 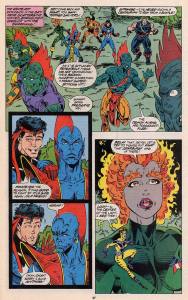 The Guardians run off the Badoon/Centaurians with the help of the battle above them and see Aleta and Stakar hand in hand, ready to fix the time jolt mentioned in the last issue together. Then they see why, the Hawkgod has fused their hands together. 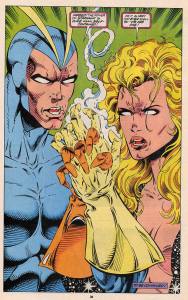 Notes: I have missed Kevin West’s pencils and it’s a welcome return.

The Protege/Beyonder story is getting a little tiresome now and am glad we’re only a few issues from this being resolved. The Hollywood sub-plot isn’t as long in the tooth, but am still curious about where it’s going.

As annoying a character as he was, I’m glad to see Starhawk and also glad to see Yondu, West makes it look like he’s always drew them, even though, non-flashback this the first time he’s drew them.

Yondu rebuffs Vance’s attempt to talk to him, reminding the team of the consequences of their trip to the past.

Overall a solid issue, again leading in to a larger story, the tension is mounting.

Next Time: The Starhawks go back in  time, the Guardians of the Galaxy go Beyond.