Guardians of the Galaxy 61 was cover dated June 1995 and was on sale in  April 1995, sharing the spinner racks with Fantastic Four: Atlantis Rising #1, Gunsmith Cats #1, Kill your Boyfriend #1, Loose Cannon #1, Mantra: Spear of Destiny #1 and X-Men: Omega 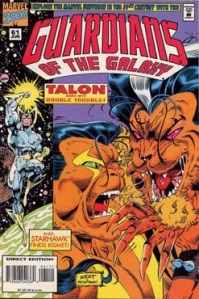 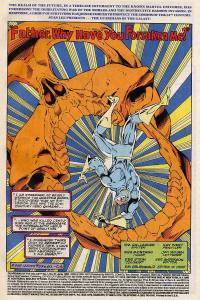 Father, why have you forsaken me? Was written by Michael Gallagher, pencilled by Kevin West and inked by Steve Montano and opens with Starhawk being consumed by the Abrogate. He awakens in a white room, surrounded by unfamiliar beings. This is the White Room, last stop for all the wearers of the Quantum Bands. There he encounters Quasar, his father.

He tells Quasar he is leaving and asks if there is anything Quasar wants said to anyone, including any offspring. Quasar, angry for this being brought up, tells Starhawk about his offspring.

In the dying days of the War of the Worlds, Quasar and his girlfriend Kismet are trying to save as many civilians as possible, but Kismet is fatigued. Quasar’s family is gone and all that is left is Kismet, who is pregnant. Quasar decides to get Kismet to safety on the planet Vesper. The Sisters of Mercy there welcome Kismet and agree to care for her in her pregnancy, but urge Quasar to rest, he too is fatigued. He disagrees and flies off, only to fall victim to the Abrogate. He didn’t make it back to Earth, which fell to the martians and as a result be blames himself for the millions of deaths that followed. He doesn’t want to know about his child as it would make it all worse. 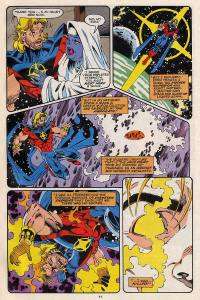 Starhawk holds his tongue, instead decides to blast out of the White Room and escape. He does this, leaving the former Quantum Band wearers alone with the plant in the middle of the table. The plant grows and shows itself to be Eon, who points out that his own son’s agenda begins to concern him.

Now aware of his parentage and having met his father, Starhawk decides to go after Kismet his mother and bring this quest to an end. He arrives at Vesper, to learn Kismet’s fate and is confronted by a robot called Pathbreaker, who is there to prevent trespassers, by destroying them.

This brings to an end the search for Quasar and it’s a bit of a damp squib of a story.

Kevin West’s art is not as great in some panels and it’s only the revelation that the Eon we met earlier was in fact the son of Eon that makes this issue of any real interest beyond the flashbacks.

This is the next to last issue and I’ll be honest, my interest has all but expired.

The Me Nobody Knows was written by Michael Gallagher, with art by Michael Bair and opens in the planet Lem, where Talon of the Guardians of the Galaxy seeks his former mentor Krugarr, the Sorceror Supreme. 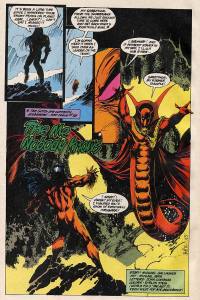 Talon is there to get the amulet Krugarr took from him, to solidify his position within the Guardians. Krugarr points out that by devaluing his mind and enhancing his body, he is no longer worthy to wield it’s power. Talon disagrees until he comes face to face with his older self. The more jovial and mystically minded Talon is quickly gutted by the newer model, who still can’t use the amulet. 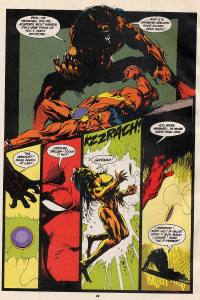 Shown the futility of his quest, Talon humbles himself before Krugarr, who to further bring Talon back to his former self shows him the birth of his son to Rancor. The child Talogan is born on Haven II and Talon’s rage at this leads him to try and restore the spiritual balance he once had and earn what he feels is his. Krugarr contacts the Icarus to tell Vance Astro that Talon is  undertaking a grand and glorious journey and will be gone for quite some time.

I’ll be honest I wasn’t a fan of the new and improved Talon and am glad to see both the end of his involvement in this title and the start of his journey towards redemption.

I found the art scratchy and a little inconsistent, but enjoyed it more when I saw it as a reflection of the state of mind of the characters.

Overall not a great issue, but it was nice to see something of a happy ending for Talon.

NEXT TIME: Time to go and Endgame. The Guardians of the Galaxy’s title comes to an end.