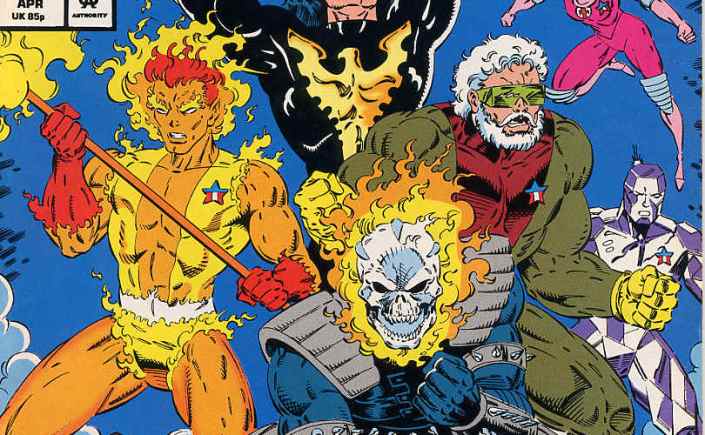 Guardians of the Galaxy 35 was cover dated April 1993 and was on sale in February 1993, sharing the spinner racks with Bloodshot #1, Hardware #1, Lance Barnes: Post Nuke Dick #1, Legionnaires #1, Sandman Mystery Theatre #1 and Stormwatch #1.

Biological Warfare was written by Michael Gallagher, drawn by Kevin West and inked by Steve Montano and opens with a brief recap of the current situations of the Guardians of the Galaxy before switching focus to Martinex’s Galactic Guardians and the decaying area of space seen in the last issue. Giraud, the current Phoenix, flies ahead of the rest of the team into this decayed space, falling victim to Bubonicus, who infects him with some sort of disease. 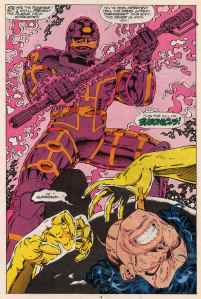 He flies back to his team, with his power raging and the flaming raptor effect grows so large it dwarfs the Icarus and engulfs a nearby uninhabited planet. 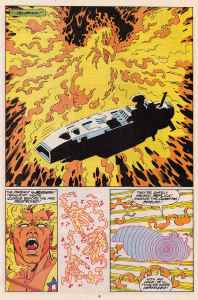 Firelord, as a protector of the universe and the spirit of vengeance are enraged and fly after Phoenix, despite Martinex’s warning, while Mainframe gives us some exposition on Bubonicus.

As this happens, Bubonicus infects Firelord and the spirit, both collapse (well they’re in space, so they sort of fold over, but don’t actually go anywhere) and Martinex orders the ship de-cloaked and the two retrieved. Replica argues, which doesn’t sit well with Martinex.

Meanwhile it seems that Bubonicus’ actions may have a larger consequence as Mainframe communes with Eternity, the being whose body encompasses the universe itself. The decaying space is actually a malignant cancer in the body of the universe and unless the Phoenix can help, the universe is in danger. On the Icarus, Bubonicus attacks Martinex, only to learn that Martinex was behind him and Replica is unharmed, she changes form into a Jadroxxian the beats Bubonicus into unconsciousness. 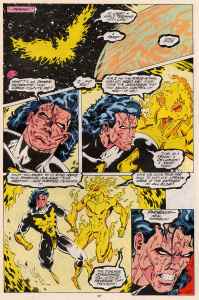 Giraud burns the infection from himself and then does the same for Eternity and all living things take notice. Phoenix returns to the Icarus and does the same there, causing Bubonicus himself to vanish, but allowing the rest of the infected team members to recover. 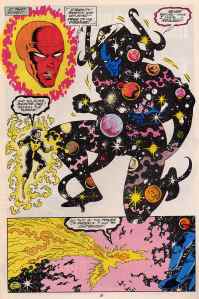 Replica sees that Bubonicus has gone and the Galactic Guardians head to rendezvous with Drydock, just in time to see it destroyed by the Dread Dormammu.

Notes: That is a hell of a cliffhanger.

This is a disjointed story, feeling at once rushed and also padded.  The threat of Bubonicus is consdered so great and yet he is taken out by a teenage Skrull. It seems a little too easy.

I enjoyed seeing Eternity as part of the story and his being injured was interesting. Using Phoenix to cauterise the fabric of the universe is very much in keeping with it’s earliest use in the 70’s X-Men.

West’s art style has fully taken hold now and it’s looking like a good fit, with the not quite so human looking characters still having personality and features.

It feels very much like a fill in issue, but by the main creative team and am it feels like a getting the pieces in place for later issue, than a fully fledged story, that said I do like seeing the Galactic Guardians again and Martinex has been missed from this title for the last 18 or so issues.

Next Time: The Galactic Guardians vs Dormammu and what happened to the Guardians of the Galaxy? 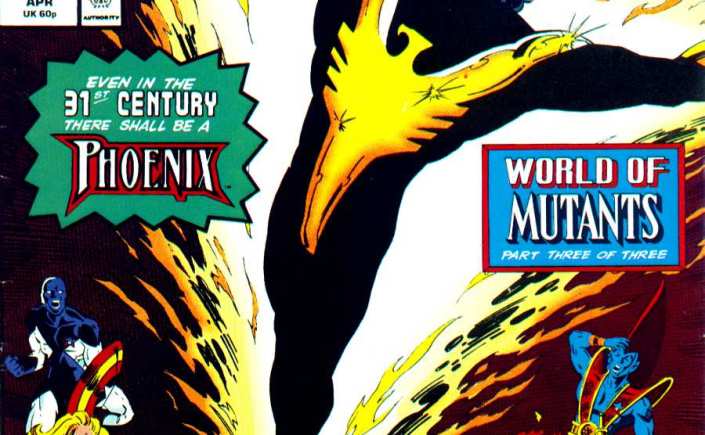 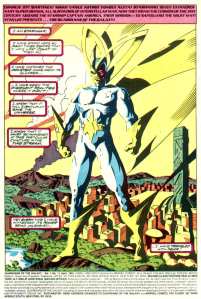 Once and Future Phoenix was written and pencilled by Jim Valentino and once again Steve Montano did the inks. The Story picks up seconds after the last one ended, with Giraud of Haven being used as host to unleash the Phoenix. The Phoenix devours the volcano which housed him and Starhawk watches, remembering how this has all happened before, but it still quite afraid.

Giraud revels in his new power as Charlie-27 tries to stand up after being floored by the battle sphere in the last issue. Phoenix decides to end Rancor’s tyranny by ending her life and moves towards to tower, despite Starhawk’s words of caution.

The battle sphere turns on the Phoenix, who destroys it with a wave of his hand forcing Side-Step to teleport away. She opens a portal to get Rhodney and Batwing away as well, but before that can happen Charlie manages to get a shot off and  Rhodney falls.

There’s the a scene change and we are on Force’s ship. Brahl is walking through walls trying to sneak a pervy look at Broadside, but instead of her being in the shower, she’s on her bed fantasising about Charlie-27, who’s image is on her holo-tv sort of thing. They go to the bridge, fuming at eachother and Interface comments that an object too small to be anything but a person and too hot to be anything but on fire is heading there way.

Back on Haven, the attacking Guardians Vance & Nikki, face Rancor, Blockade & Shaddo, From behind Yondu, Aleta and Martinex as well as Replica attack with Yondu firing an arrow into Rancor’s leg. Seeing that Blockade can’t be stopped, Nikki instead fires her wristguns at his eyes, blinding him. He smashes her into the ground in front of a distraught Vance and then retreats with Rancor and the rest of the surviving mutants via Side-Step’s portal. Aleta then reveals that Nikki was always protected and is unharmed. Charlie runs in and everyone’s happy to be together again… and then the Phoenix shows up. 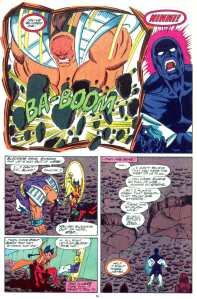 As this happens, earthquakes are ripping through the planet as Rancor de-activates the seismic restraints, she is reminded by Mindscan that this will destroy the planet, Rancor could care less. Starhawk arrives and hits everyone’s g-stars and teleports them to the Captain America II against their will. 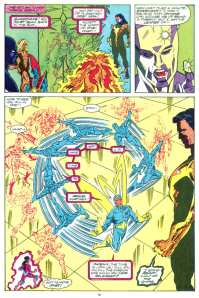 Before the ship can depart, the planet explodes, seemingly killing everyone on the surface, even Starhawk. Charlie points out that the ship can’t leave, since all the power is being used by the transporters. The planet’s remains are quickly devoured by the Phoenix, who then departs. 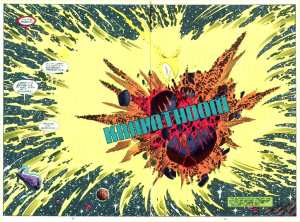 Starhawk signals them from Mainframe’s world, telling the team that the inhabitants of Haven are safe, teleported to safety at the last second and the Phoenix has agreed to be placed inside psionic dampeners to keep in under control. No one’s pleased that once again Starhawk has played chess with the Guardians of the Galaxy, but are thrilled with the result that while the world of the mutants is gone, the people are safe and will be cared for by Mainframe, who is looking forward to the company after many years alone. Just as they Guardians of the Galaxy brief a sigh of relief, Nikki tells them that Firelord has sent a distress signal.

Notes: This is a fast paced conclusion and as a result almost feels a little rushed.

How tough is Charlie-27, all those hits he took in #10 and not only is he still alive while the entire crowd seemed killed, but he can get up and fire that cannon before running to join the rest of the team.

Once again, Starhawk acts like the team works for him and does his own thing, without telling anyone what’s going on.

The Phoenix is a character/force of nature long familiar to the X-Men, with it’s arrival always seen as a bad sign, it was a little deus ex machine, but worked for the purposes of the story and the costume design was excellent.

The Force subplot moves their particular story along and Broadside’s infatuation with Charlie-27 is a nice little bit of colour to what could be a very bland character, much like the rest of Force has been.

Overall a satisfying issue ending the Guardians of the Galaxy’s original mission. This is also a bit of a milestone issue for me. This is the last back issue, from this point on, I picked the comic up off the rack and read it until it’s cancellation at issue 62.

Next ish: Firelord returns and he isn’t the only one.

Tell them the Overmen are Here was written, drawn and inked by the usual suspects and opens with a bit of a recap of the last issues events. As the call for surrender ends, the girl in pink from the last issue appears before Giraud. He identifies her as Replica. She wears a pink all in one costume with a sort of ankh looking pendant. Charlie-27 tells Giraud to get the populace to the town square and the urge them on he announces that the prophesied Overmen are here. 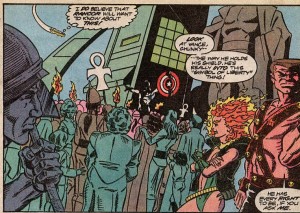 Word spreads and in a lot of places, the same ankh-like symbol is seen. It is also the same sign used in the massacre, whose aftermath was seen by Starhawk several issues ago. Around here there is a scene change, with Starhawk being back on Mainframe’s world, making preparations to contain something that  Starhawk means to unleash, the term psionic dampeners are used.

The mutants notice the disturbance building in the square and their first response it to deploy a battle sphere, which is a flying ball with guns coming out, to start massacring the crowd. Using Bear’s gun from previous issue, Charlie fires back. The gun’s recoil rather unceremoniously, knocks him on his bum. Blaster and Batwing exit the ship and also attack the crowd. Giraud fires on Blaster, killing him. Batwing is horrified, giving Charlie the chance to anchor himself and fire again. The fire drawn towards Charlie-27, the rest of the team splits even further. Replica changes into a bug and flies off to free the captured Guardians, Starhawk takes Giraud somewhere else entirely and Vance takes Nikki to storm Rancor’s tower.

The scene shifts to a Stark world where the High Sister greets TSFKAT (The Stark Formerly Known As Taserface) and declares him one of the most powerful of the Stark and owner of a new name ‘Overkill’. His new gold and red armour is revealed and a reckoning is promised. 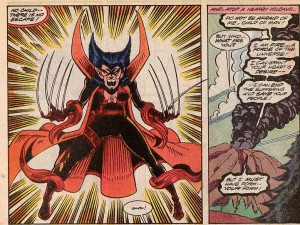 Vance leads the humans almost uncontested into the tower, while Replica frees Aleta, Yondu and Martinex, where we learn that she is only 13. Only for all those in the tower for face Rancor.

The scene shifts to the Volcano again, this time Starhawk is only the observer and Giraud is talking to the disembodied voice, now wearing a glowing form much like Giraud’s. The glowing figure seems to be asking Giraud to make some kind of sacrifice, or making sure that Giraud knows what he is giving up. 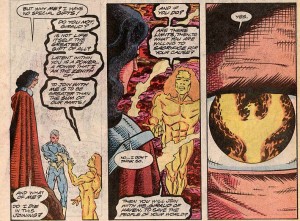 At the tower, Rancor, Shaddo and Blockade are fighting the attacking Guardians and look to be winning, until there is a massive burst of light in the distance and out of her window Rancor can see a familiar shape to many a Marvel fan, a huge bird silhouette composed entirely of flame. The Phoenix has returned.

Notes: This is a solid little middle part issue, setting up the rising action, leading to a cliff-hanger before the conclusion.

The Stark subplot is moved forward and we’re introduced to Overkill. While very 90’s, it’s a lot better than Taserface, I think we can all agree.

The ankh-like symbol is becoming more and more noticeable and it looks to have been outlawed on Haven before now.

Replica is clearly pointed out to not be a mutant and her very presence seems to upset or offend Nikki.

The massacre in the square seems to remind Nikki of watching her people on Mercury killed by the Badoon, a reminder of the harsh upbringing she had.

Next ish: The Phoenix has returned, that’s almost never a good sign.