Downtime was written and drawn by Jim Valentino and inked by Steve Montano and opens up with Charlie-27, Nikki, Martinex, and Aleta training and Yondu just sort of standing there looking at his ear-ring. When his standing there holding his ear-rings is commented on, Yondu becomes enraged and demands that the team search for Force. Vance Astro walks in and points out that there was no trace of Force in a 6 parsec radius and they have no idea where to begin any search for them.This sort of ends the training and the team goes to their respective quarters for some much needed downtime.

In a cut away scene TSFKAT (The Stark Formally Known as Taserface) is being horrifically tortured at the order of the Stark’s High Sister. The commands that the torture end and that he be remade, his shame and anger are great and TSFKAT can be of further use.

Back on the Captain America II Martinex, Vance and Aleta talk about Yondu, Aleta floating away leaving Martinex and Vance alone. Martinex and Vance carry on talking, where Martinex mentions Vance taking over the leadership of the Guardians. Vance declines and walks into his quarters.

Nikki has a bath, something she’s only done since her brief fling with Charlie-27, who walks in long enough to get a marriage proposal shot down as she walks away. Martinex works on the bridge in a freezing cold section, thinking that the Guardians of the Galaxy needs to operate on a much large scale a truly galactic group of Guardians. 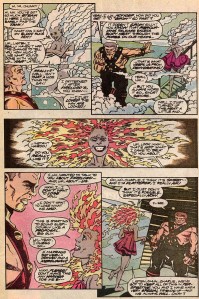 In another cut away, Starhawk sees the aftermath of a fourth massacre by the Knights of the Sacred Faith and what looks like an altar or monolith of rock surrounded by the dead bodies of non humanoid children, he muses on the events, knowing that soon the Guardians will be involved and another reference to this child.

Martinex walks into Charlie and asks his opinion about Vance seeing as they are so close. Charlie points out that they aren’t, he just keeps him close to avoid being stabbed in the back. Then the ship lurches to a stop and the two race to the bridge. On the bridge Yondu demands again that they take the ship to find Photon, he is so distraught by this point that he fires an arrow at the team. Charlie orders Aleta to gag him before he can whistle, thereby changing the arrow’s direction and Charlie takes him out with a thunderous punch. Nikki comments on how hard he hits, Charlie comments on Centaurians being quite tough and needed a harder hit. Martinex tries to talk to Aleta about her attitude to Starhawk and it goes as well as you’d expect asking a woman about the man she’s divorced from. Yondu is placed in his quarters and Vance takes a shower. 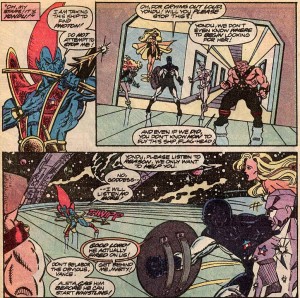 After a thousand years, Vance is removed from his suit. Martinex has made his quarters have the same properties as his suit and while it’s not suitable for any other being, inside he is normal once more.  As normal as a man who recreates the bedroom he had as a child. He gets into bed when Aleta walks through the wall. Here’s were we find out that Aleta is physically a solid light construct, made to look like her old self and can walk in Vance’s room as any other. She then pretty much tells him she wants him. Being an old fashioned guy he’s a bit taken aback by it all and asks if they can slow down. They hold each other for a while.

In our final cut away Malevolence is advised by her father in a realm of fire, that allies are needed against the Guardians of the Galaxy if she is to the claim the child.

Yondu wakes in his quarters and tries to meditate, getting nowhere he decides on action and using his star-badge, teleports to the shuttle bay. He tries to get the shuttle flying, but having an aversion to technology has no idea what to do. Starhawk announces his arrival and for his trouble Yondu attacks him with his knife, blaming Starhawk for not warning him about Photon. Starhawk talks him down and the two of them pray.

Tensions begin to grow within the group, Martinex fears for the future, but then they arrive at Haven, the world containing the last colony of man, lost before the Badoon invasion. On the planet below, a telepath points out to a group of other mutants that a ship has arrived in orbit. There is then a proclamation of intent to hold onto their position by the leader of this group and the world of Haven, a mutant called Rancor.

Notes: After big stories or crossover events, there is often a taking stock, character piece, where subplots are forwarded and characterisation is the issues focus, this is one of them done right.

Martinex seems now to have more a character, admittedly it’s a constantly second guessing himself worrier of a character, but still it’s something.

Yondu’s encounter with Photon has caused a existential/spiritual crisis that threatens a breakdown, again more character than before.

Nikki and Charlie’s relationship is curtailed at this point, Charlie feeling far more for her than she does for him and the images of him in shadow are quite affecting.

Vance Astro has his childhood bedroom recreated, based on what happens in New Warriors, featuring his younger self, that’s messed up.

Aleta’s body is made of energy and she can walk through any wall on the ship and doesn’t seem to have told anyone? Really?

This is sort of the beginning of the Vance/Aleta relationship and one of the earlier sights of him out of costume.

There’s more Malevolence in this issue, leading to more stuff happening down the road, nothing of interest, it’s just there.

Haven is the colony founded by Magneto and the mutants who left Earth during the War of the Worlds and now seems to be a world run by a few tyrannical mutants, with the rest of the population believing in a saviour myth called the Overmen.

The mutant leader Rancor, now who does she look like?