The next Guardians of the Galaxy appearance was September 1974’s Marvel Two-In-One # 5. On Sale in June 1974 it shared the spinner racks with Amazing Spider-Man 13, Flash 229, Captain Marvel 34 and Justice League of America 113. 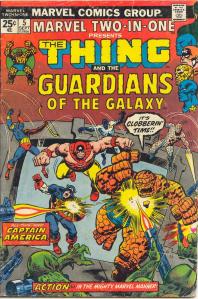 Just like the previous issue the story was by Steve Gerber, Sal Buscema but now joined by Mike Esposito on the inks. The story opens with The Thing and Captain America along with Sharon Carter Agent of S.H.I.E.L.D. being delivered unconscious to Drang who is ruling earth as part of the brotherhood of the Badoon. Drang and the mind probe he uses on Cap were seen in Marvel Super-Heroes 18.  The Mind probe is a way of recapping the events of the last issue. Once the Badoon realise who they have with them they decide it’s best to kill them. It’s at that point the The Thing takes action and the three of them fight their way out of  Drang’s throne-room and make a run for it in a great series of action packed pages.

Once out in the street they are attacked by more Badoon and Zom units and again make their getaway. Tarin from the previous issue meets with the resistance leaders to get them on board and their skepticism is short-lived when another member of the resistance backs up her story with video evidence and then the call goes out to the Guardians of the Galaxy. 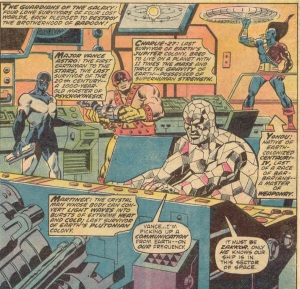 Vance Astro, Charlie-27 and Yondu all in new uniforms along with Martinex receive the message and decide to return to Earth to help the resistance against the Badoon more directly. It is worth noting, that this is the first appearances of staples of the Guardian’s mythos; the Guardian stars, red white and blue stars worn on the chest which act as communicators and teleport transponders a good decade before it appeared as an idea on Star Trek the Next Generation as well as the USS Captain America.

The Thing, Sharon and Cap still seeking allies are once more attacked by the Badoon and just as a Badoon is to call for reinforcements, a golden arrow strikes his neck and the Guardians of the Galaxy have arrived. 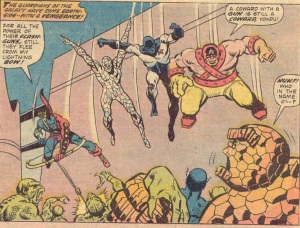 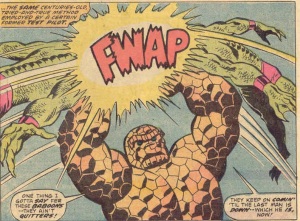 With the seven heroes together, the Badoon are made short work of and at that point even does the meet and greet thing, with Vance Astro recounting his origin to Cap and the arrival of the local resistance. With an army in place, big guns like the Guardians and the Thing and a legend like Cap to lead them, it is time to attack and following the Thing’s lead the army head straight for Drang’s throne-room  to take out New York’s seat of power. 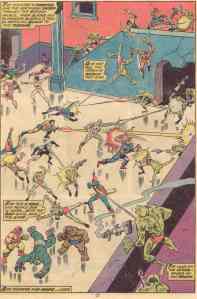 After a brutal battle, they are victorious and while they only have freed New York, one part of one world in a solar system the Badoon have completely conquered it is the first victory and as Cap points out, it won’t end there,  taste of freedom is never enough. The Badoon will fall. With that, Cap, Sharon and the Thing return to their own time leaving the Guardians with a war to win.

Whilst the final act seemed a little rushed, from meeting up with the Guardians to the end being a little too quick for me, the story as a whole was very enjoyable, Cap show’s the good guys how to win and the Thing shows the bad guys it’s clobbering time.

The Guardians return in a number of Defenders appearances which I’ll be looking at soon.