This was the final part of the Guardians story arc and was as before written by Steve Gerber, with art by Sal Buscema and Vince Colletta and the final chapter was titled “Let my planet go.”

The Guardians captured by the Badoon as well as Nighthawk and about to be executed by firing squad, Vance attacks the Badoon using his psychokinesis, whilst Val frees the three captives. Nighthawk notifies Val of Doctor Strange’s apparent death, whilst his astral form locates Yondu and Hulk. Hulk is teleported to a mountain along with Goozot’s courtesan and set upon by several large mechanical ants. Well as you can imagine, the ants don’t last too long, but after more ants arrive Hulk decides to leave, when he finds himself trapped on the mountain by the TV show host, Hulk simply destroys the mountain and is teleported from the rubble to the studio. 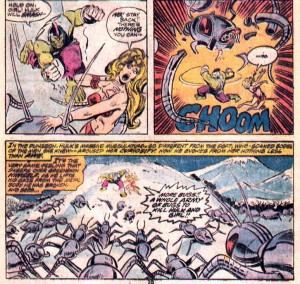 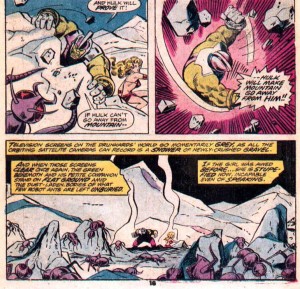 While all this is going on, Starhawk arrives on an asteroid to see his three children, Tara, Sita and John, he tells them he wants to stay, but after seeing a woman on a view screen he calls Aleta, he declares he has to return to Earth, where the freed heroes are attacking the Badoon.

In the studio, the host realises that he has yet to put Hulk back in stasis when he is grabbed by him and held up. Just as Hulk is about to strike, Doctor Strange teleports them back to Earth to join the melee while he and Jack Norris teleport from prison camp to prison camp to liberate the human prisoners of the  Badoon.

Just as they are to join the others Starhawk arrives and points out that the Defenders should return to their own time and leave this war to him and the Guardians. He asks them to look into his eyes as he refers to himself as ‘One who knows’. Jack looks and is convinced, as is Strange who returns to the others with Jack and renders all the Badoon in that city unconscious, so another city is taken, this time with no bloodshed. 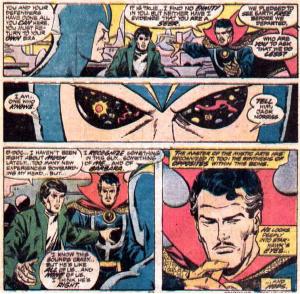 The Defenders  are reluctantly returned to their own time by Strange, who tells the Guardians that the war against the Badoon is for them and Starhawk, not the Defenders. 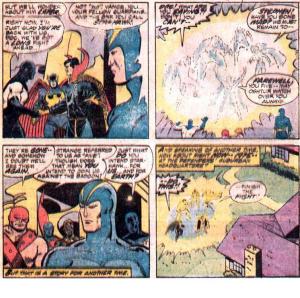 The Defenders return home and soon start questioning Strange on his motives, but Jack Norris points out that inside Starhawk’s eyes, he saw a fusion of elements that Earth will sorely need, in a millennium from now.

A fair, if unspectacular end to this mini saga. The scenes with Hulk were enjoyable and the fights were cool and everything, but it feels sort of hollow really. The stuff with Jack Norris at the end was a little navel gazing for me. But it was an important issue. The tide seems to turn against the Badoon and Starhawk joins the team, although no one seems especially thrilled with it. It’s also the first reference to Aleta and the first time he refers to himself as One who knows, both important parts of his character.

The next appearance is in Marvel Presents and is the beginning of a series of stories in which the Guardians are the stars, not just guests and a lot happens as a result.

Stay tuned Guardians fans, things are about to heat up.