Re-Enter Starhawk was written and pencilled by Jim Valentino and inked by Steve Montano and opens with a quick recap of last issue and then a splash page introduction to the new Starhawk. Unlike the previous iteration, this time Starhawk and Aleta share the body equally, with Aleta being able to perceive both the outside world and also Starhawk’s mind. Despite his no longer being ‘One Who Knows’ they head straight for Madripoor to aid the Guardians. 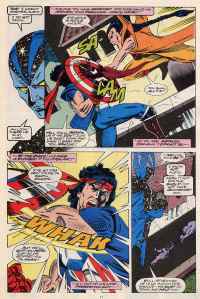 There are then five little side scenes, one is two aliens Tork and Dumog fleeing capture, until like Teju last issue meet with an unseen ally. The second is Rinquist and his master confirming that the  cloaked figure who summoned the Guardians did not send Rancor and her lieutenants to him, then we see Replica posing at the Protege calling off the search for Starhawk under to watchful eye of Malevolence, Simon (Hollywood) Williams calls Vision (Mainframe) to try and reconnect with the only family his has left and finally there’s an external view of Galactus’ world ship where Galactus feels that his hunger is more important that a long ago made promise, which is full of ill portent. 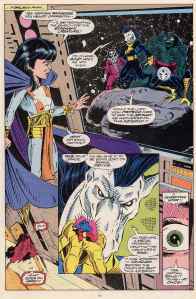 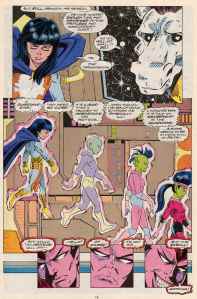 Back to Madripoor we go as Starhawk enters the fray, taking Rancor out after saving Nikki, before introducing him/herself. She/he is reuinited with a lets be honest justifiably freaked out Vance Astro. Rancor and MindScan try to convince Starhawk that he should join them as there is clearly tension between him and the Guardians. Charlie-27 states that Starhawk has never been a traitor, but Starhawk counters that he plays only by his own rules. 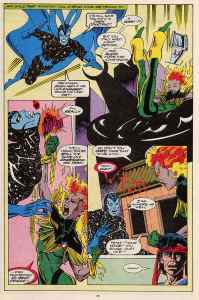 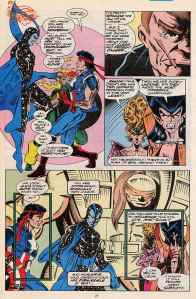 Notes: Although a lot happens in this issue, very little of it moves the Rancor in Madripoor story along and a lot of time is dedicated to dangling plotlines and upcoming stories. That said it’s a great little issue and the time taken to reintroduce Starhawk fleshes out the changes within him/her.

Aleta and Stakar as back to bickering with each other which Aleta needling Stakar that he is no longer one who knows more than once. Then again, he does pay attention and isn’t stupid.

Rather than light powers, Starhawk’s new gifts are dark related, hence his new colour scheme. It does raise the question of whether Starhawk knew this was going to happen, or whether he is adapting to this new form.

Despite them once ruling an entire world, Rancor’s lieutenants do very poorly against a rather under-powered Guardians team, with only  Rancor herself seeming like any real threat.

The scene between Talon and SideStep is quite amusing, two people who would likely get on, but fate has put them on different sides. SideStep seems less cruel and violent than the rest and just seems to be working for Rancor because it’s easier.

After being apart for so long, Aleta and Vance are reunited, he’s out of his suit and she is now no longer a she. This is awkward and not played for laughs, which a nice touch.

Starhawk is clearly not loyal to the team and it’s left very much in the air what he will do next.

Next time: War of the Guards and a guest artist.