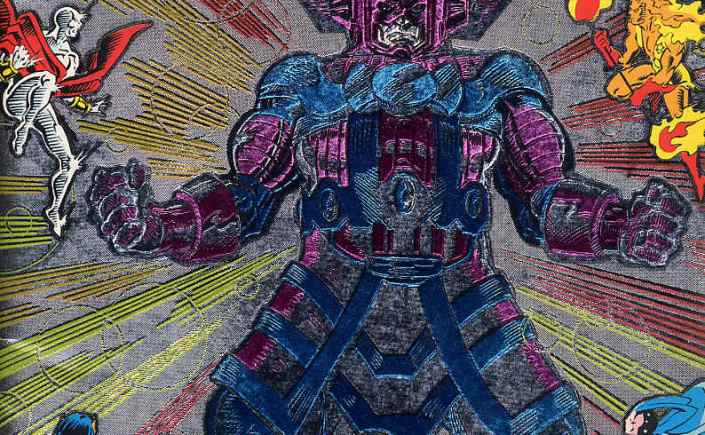 And Now Galactus was written and pencilled by Jim Valentino and inked by Steve Montano and opens with the Silver Surfer, known now as the Keeper leading the Guardians of the Galaxy in their Drydock Station to Alpha Centauri and a rendezvous with the planet devourering Galactus.

The Keeper continues his tale from last issue,  after Zenn-La’s destruction, he attacked Galactus. As you can imagine, that really didn’t go too well. His board destroyed and the power cosmic stripped from him along with his silver skin sheath, he was flung towards the edge of the universe.

Found by one of the Watchers, he was taken from the universe to hide and heal. Over time this Watcher, Aron, taught the Surfer to use the bands more effectively and to reawaken the power cosmic within him. Thus the Silver Surfer became the Keeper and he save populations and worlds from Galactus wherever he could. One of the worlds he saved was Mainframe’s world, where Martinex is currently staying. He talks to the Guardians over the com-link, mainly to set up the story in GOTG annual 2. The plan is set, the newly arrived Firelord and the Guardians of the Galaxy will keep Galactus at bay, whilst the Keeper saves the population of the oceanic world that Galactus is trying to feed on. 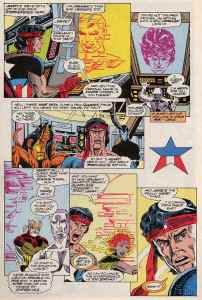 Firelord is quickly brought down and Charlie-27, Starhawk/Aleta and Talon take the fight outside to Galactus. Talon even uses magic to hold Galactus, which only gets him a telling off from a disembodied Dr Strange head. On the ship, Nikki seeks to warm Firelord up for aid healing, while Vance speaks to Yondu, who informs Vance that his spirit god Anthos had told him that there are Centaurians on the planet below. 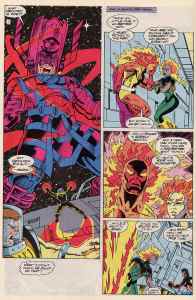 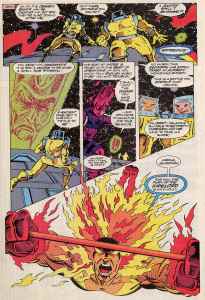 The Keeper teleports the Alphan underwater city to Centauri IV, just as Yondu arrives by teleport. An Alphan carries the drowning Yondu to the surface. 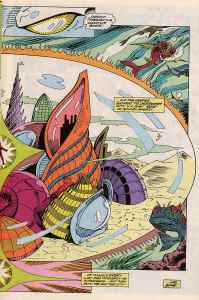 Meanwhile Galactus wastes no time bringing the Guardians down, only to face a Keeper, as tall as him. This Galactus sized Keeper attacks Galactus who, having gone without sustenance for so long, is debilitated. The  Keeper is about to deliver the killing blow till Eon arrives and talks him down.

With the Alpha city on Centauri IV, Galactus feasts on the planet Arima. An agreement is reached. Firelord will remain the interim protector of the universe and the Keeper will join Galactus to help him feed, while  saving lives. Then the Keeper reforms his board and Yondu finds the lost Centauri tribe. The Guardian who has lost the most, is home again. 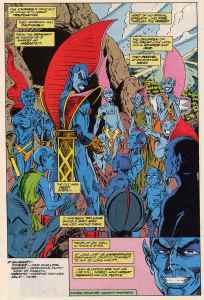 Notes: Where was Drydock throughout this whole run? This is the first time we’ve seen it since Annual 1, but it’s never said what happened to it.

This story seems a bit padded and seems to be just the chance for Valentino to do something with Galactus.

The Keeper assisting Galactus to feed him and save lives at the same time, seems to be such a simple idea, that it’s strange it’s not come up before now.

It was nice to see Firelord again, but his part in the story, much like Nikki was very minimal.

A fight scene including Galactus is always worth seeing.

Ok, the Guardians’ teleport system put Yondu in the middle of the ocean. Really?

Although it may lead to his leaving the team, Yondu finding his people is one of the high points of this issue.

Next Time: The Secret Origin of the Guardians of the Galaxy.